The origins and early years

According to Wikipedia an agent-based model (ABM) is

ABM: class of computational models for simulating the actions and interactions of autonomous agents (both individual or collective entities such as organizations or groups) with a view to assessing their effects on the system as a whole.

A cellular automaton is a particular class of ABM. It is a discrete dynamical model used and studied in a variety of fields: computer science, mathematics, physics, complexity science, theoretical biology among others. Compared to ABM’s, Cellular Automata are more structured: ABM agents are heterogeneous and can interact in complex ways. A cellular automaton consists typically of a regular grid of cells, each one in one of a finite number of states.

Both of these concepts originate in the 1940s in the work of Stanislaw Ulam and John von Neumann while they were working at Los Alamos National Laboratory studying nuclear fission. Underlying the viability of this type of model is the development of techniques to use random numbers in computation: Namely the Monte Carlo method.

In a recent post and Open Risk Academy course we discussed the important role of simulation in modelling credit contagion in economic networks. In this post we take a step back and look at a broader class of systems such ABM and Cellular Automata

Adoption in Economics and Finance

ABM techniques find a number of applications in economics but are very far from mainstream. A recent review of the most notable work in a variety of economic contexts was given by 1 (which we summarize here):

There are various current efforts to create flexible and general purpose frameworks for modelling Agent Based systems. The following list is indicative (with links to an open source repository where available):

The Game of Life - with a twist

The Game of Life, also known simply as Life, is a cellular automaton devised by the British mathematician John Horton Conway in 1970. It has been extremely successful in popularizing the concept of cellular automata and is even today a very common programming task for first time developers.

Entities are arranged on a regular grid (that can be thought of extending to infinity or wrapping up in periodic fashion). Each entities is either alive or dead (two states). Evolution takes place in global updates of all states according to prescribed rules based on the live of dead status of neighboring cells.

The evolution of the life and death of a given cell in Conway’s original version derives from the state of the neighboring cells, in particular those forming the so-called Moore neighborhood: 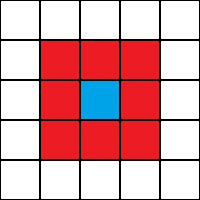 The standard rules are as follows:

Conway chose his rules carefully, after considerable experimentation, to meet these criteria6:

In order to implement the rules flexibly we split them as follows:

In the above snippet we introduced parametric thresholds:

Now we can recast the rules as follows:

For a “live” count in the Moore neighborhood,

On the other hand, a dead cell revives only if the count exceeds Death2LifeLower but is lower than Death2LifeUpper

The Game of Life is not stochastic. Once we specify the initial state, the evolution is deterministic and unique. 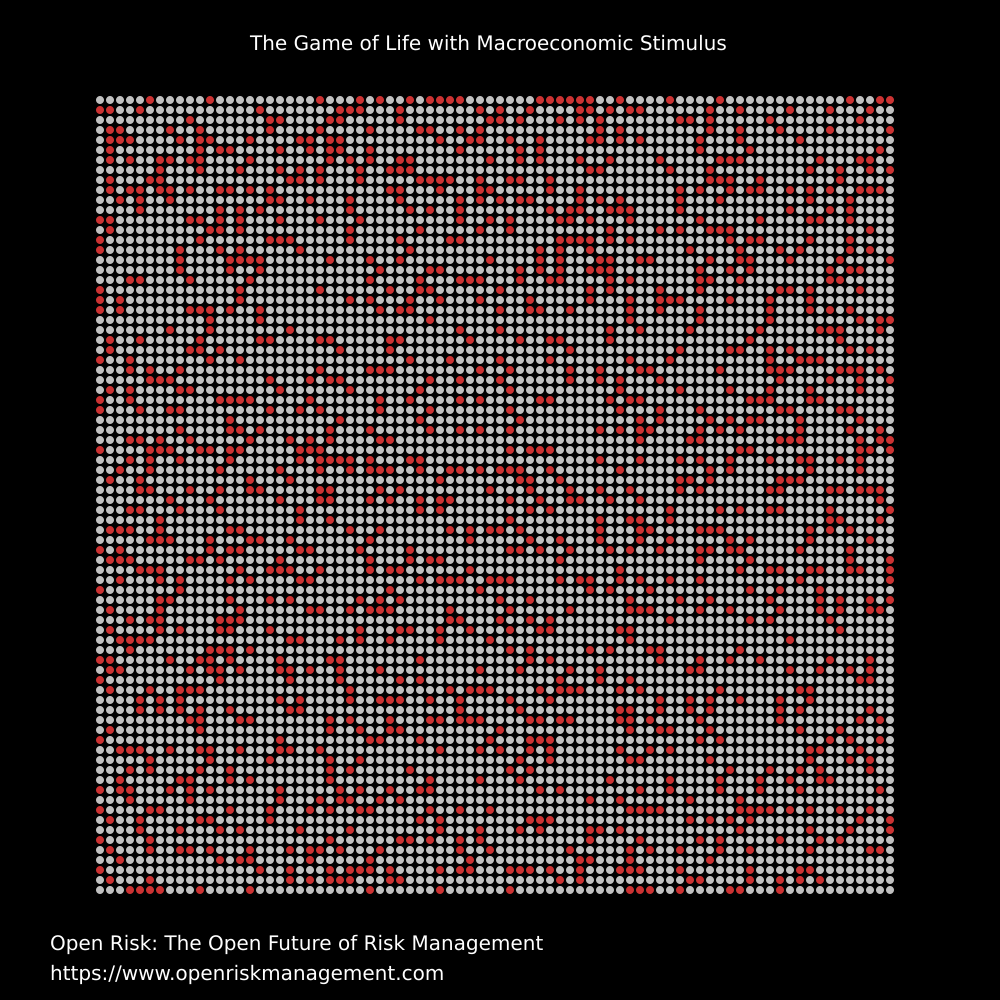 The above image shows an initial randomly seeded configuration.

It is not easy to define “typical evolution” as it depends on the initial configuration of live cells. If by “typical” we mean the development following a random distribution of initially live states then it proceeds qualitatively as follows: 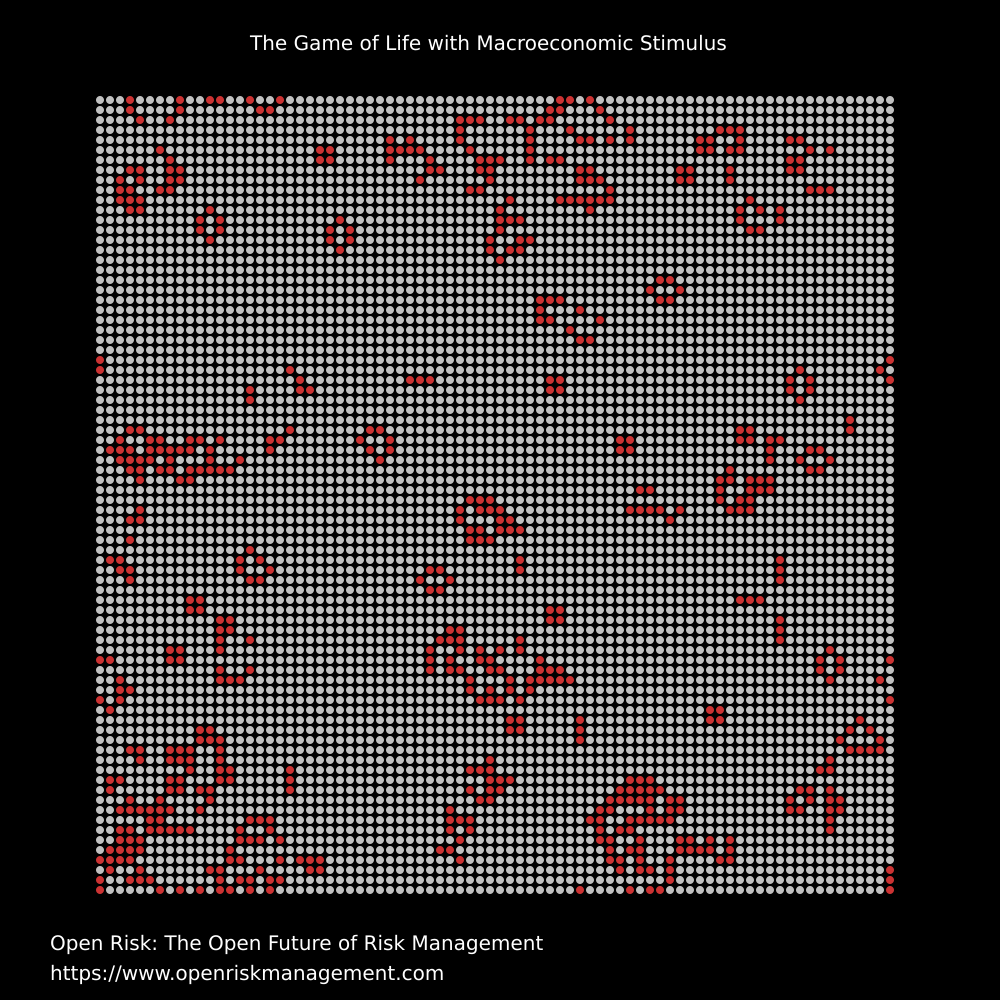 The above image shows a typical, slowly dying configuration

An example of complex periodic elements that might emerge during the evolution of the CA is Gosper’s glider gun.

While repeated experiments (or maybe brilliant reasoning!) may reveal interesting emergent behavior, the typical outcome is rather bland. How can we intervene to maintain a level of activity?

The idea is to modify the rules by widening the window of scenarios where a dead cell revives. Instead of exactly three, we include 2, 3 and 4.

Our “intervention” into the CA algorithm violates the local nature of the system. It resembles policy based on macro-economic considerations (aggregate observables) that take the global picture of the system into account. But the rule change is indeed local, in that sense that the new live cells are produced organically and are not seeded from outside as “helicopter money”.

The video shows the impact of the adjusted rules. Every time activity drops below a predetermined threshold, the rules are relaxed to allow more cell regeneration. During that period growth is actually explosive! Once another predetermined level is reached (which happens over a few periods), the rules revert to the normal.

The result of the “intervention” is that the evolution continuously bounces between the two stimulus thresholds. Notably, there is very little room for emergent behavior.