Is the IFRS 9 or CECL standard more volatile? Its all relative!

In this study we compare the volatility of reported profit-and-loss (PnL) for credit portfolios when those are measured (accounted for) following respectively the IFRS 9 and CECL accounting standards.

The objective is to assess the impact of a key methodological difference between the two standards, the so-called Staging approach of IFRS 9. There are further explicit differences in the two standards. Importantly, given the standards are not prescriptive, it is very likely that there will be material differences in interpretation and implementation of the principles (for example on the nature and construction of scenarios). In this study we perform a controlled comparison adopting a ‘ceteris-paribus’ mentality: We assume that all other implementation details are similar and we focus on the impact of the Staging approach.

We setup stylized PnL calculations for a credit portfolio with the following main parameters and assumptions:

To analyse PnL volatility we choose to estimate PnL one year forward. This is a convention that is in line with annual capital management cycles. This future PnL is being impacted both by Realized Losses (defaults) within the year and Provision Variability due to changes in credit-worthiness (both positive and negative). That change in credit-worthiness will have both systematic (portfolio-wide) and idiosyncratic factors

We use an advanced credit portfolio simulation module available in the OpenCPM platform to construct scenarios following a root and branch approach (or scenarios within scenarios). Adopting this methodology allows us to avoid making Perfect foresight assumptions. This works as follows:

The CECL provision methodology is based on the forward LECL estimate as indicated above. It is worth highlighting that the forward CECL change is assumed to driven entirely by dynamic factors - that is, we assume that the static creditworthiness characteristics of the borrower remain the same. For example the borrower does not change within the calculation horizon their leverage by additional borrowing and they do not modify their asset volatility by changing their business model. The borrower is thus effectively re-rated in future periods by monitoring the development of their dynamically evolving asset base versus the fixed leverage.

The IFRS 9 methodology requires additional assumptions about the (internal) procedure followed by the reporting entity for assigning initial and ongoing Stage classifications (State 1, 2, or 3) to the portfolio assets.

We implement the following algorithm as a proxy: 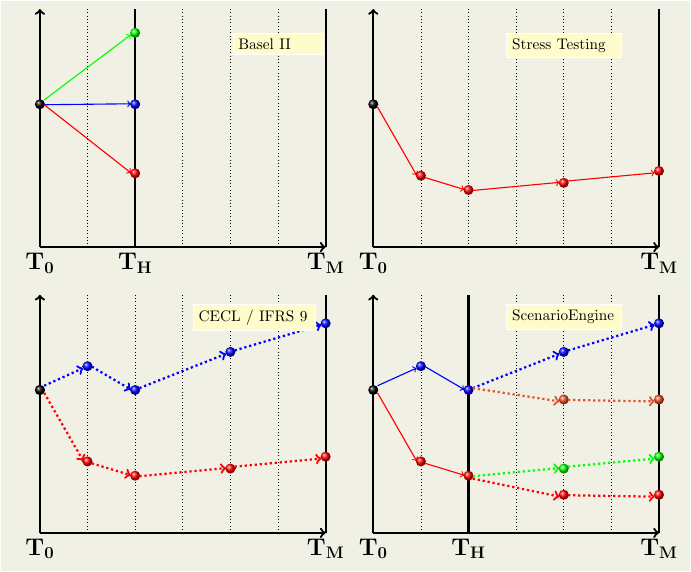 A typical annual transition matrix is taken as input for the analysis. The portfolio is assumed to be, initially, homogeneous in one of the rating states (we will vary that initial assignment to assess at a high level the sensitivity of IFRS 9 / CECL volatility differences to credit quality. 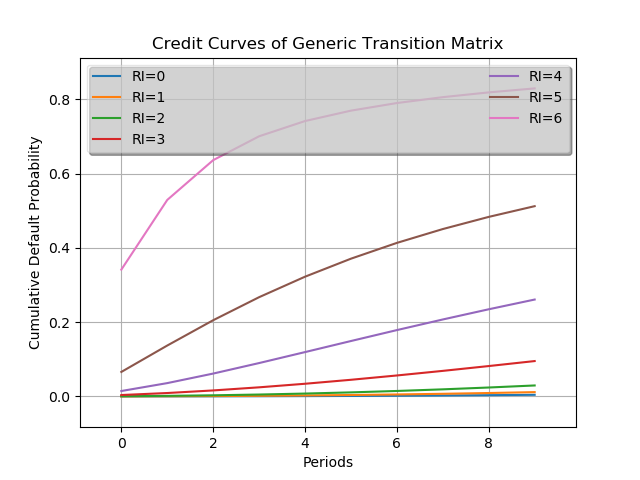 NB: It is well know that the multi-period default curves of credit assets originated at very low credit quality deviate from those obtained by exponentiating short period matrices but they are included here for comparison purposes.

We present here a summary of a parametric study that touches on two key dimensions: The credit quality of the portfolio, which governs the intrinsic credit risk and the calibration of the Staging methodology.

As indicated in the previous section, in each calculation within the parameter survey we obtain the distribution of losses and forward loss expectations. This yields a very rich set of data - in this blog post we will only highlight some of the features. 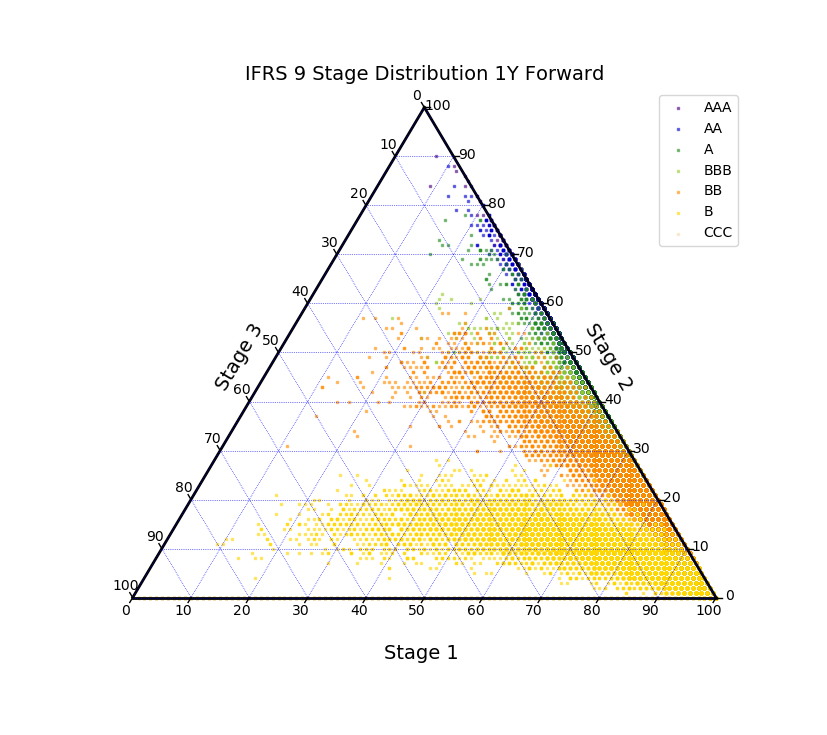 Initially all portfolios start on the lower right corner of the diagram (100% Stage 1, 0% Stage 2 and 0% Stage 3). Each point represents the allocation of exposure to Stages at the 1Y time horizon. As expected we see that in tail scenarios high quality grades primarily migrate to Stage 2 (top corner of the diagram) with relatively fewer realized defaults (Stage 3). Lower credit qualities cumulate in adverse scenarios towards the Stage 3 corner (left side), with the most extreme example being the CCC category for which the distinction between Stage 1 and Stage 2 may not be particularly informative.

From the numerical data we derive the mean and the standard deviation for the following metrics:

Next, we take a look at the influence of the IFRS 9 Staging methodology on the volatility of reported provisions. In our simplified framework we explore this by varying the number of rating classes (downward) migration that must occur before an exposure initially assigned to Stage 1 is transfered to Stage 2. We use one, two or three rating downgrades.

From the numerical data we derive the mean and the standard deviation for the following metrics:

We see that the methodology does modify the reported PnL volatility (as expected) but the ratio of standard deviation to average is less sensitive to methodology than it is to credit quality (previous table). Visually we can see the impact of the Staging methodology choice in the following diagram

It should be already evident from these first analyses that the introduction of IFRS 9 and CECL opens up entire new dimensions of credit portfolio management. We aim to slowly unpeel these in a series of blog posts.

In an earlier post we used the OpenCPM platform to explore general drivers of PnL volatility which characterise both IFRS 9 / CECL frameworks. For convenience, a summary of the earlier findings is included here:

From the current analysis we can conclude that the implementation details of IFRS 9 methodology (the Staging approach) can have a material impact on the volatility of reported provisions versus the CECL methodology. While the absolute effect is to lower both the quantum of provisions and the absolute level of volatility, it is notable that on a relative basis (that is, relative to the reported provisions, IFRS 9 volatility will be in general higher, with an intricate dependence on credit quality, tenor, staging methodology and potentially other factors